In this issue of the Photoblog I propose an “unusual” trip: an experience out of the classic routes of tourism in the Italian peninsula, in a wild land, Calabria, where the blue sea is the protagonist and the magical mythology of Homer intertwines with a present full of beautiful places.

We leave for our journey from a place that has recently been the focus of international tourism and we will discover together why: Belmonte Calabro. Belmonte Calabro, city of wine since 2003, is among other things a village of medieval origin, perched on a rocky hill in the shape of a donkey’s back, covered by the Mediterranean vegetation, and with a splendid view of the sea which, in some periods (between October and December), returns the evocative images of the archipelago of the Aeolian Islands with in the foreground the volcano of Stromboli in perennial activity. 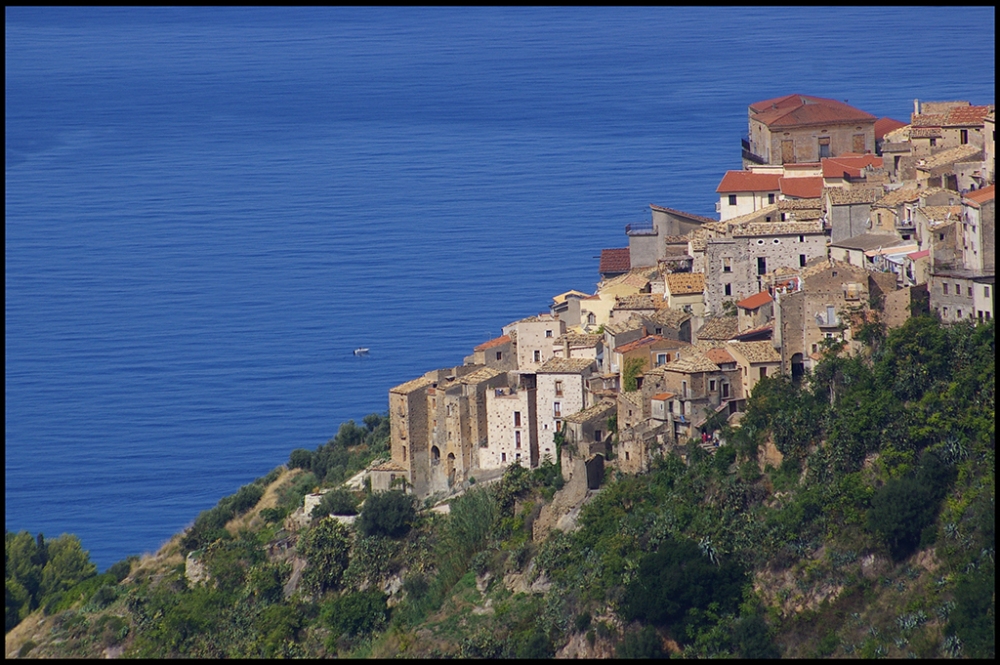 Belmonte is now home to the Marine Park of Scogli di Isca: where it is possible to dive into its depths admiring its special wonders and unobtainable in other places. In Belmonte Calabro, a small and charming village, the houses are firmly attached to each other and connected by very narrow alleys, the stone arches suddenly reveal small courtyards full of flowers; painted steps lead to shady corners; the old Calabrian sayings painted on walls: “The clear sky is not afraid of some small thunder” …

To fully understand the essence of an enchanted place like Ecobelmonte you have to start from afar, from the deepest roots of a wonderful land like Calabria, a land of migrants and emigrants. And while Calabria decreases its population at a dizzying rate and grows exponentially, there are those who remain and continue to fight both tooth and nail to keep alive the hope of seeing one day reborn their childhood places. This is the case of a group of friends who, in the first years of the second millennium, have chosen to stay and not give up to the imminent depopulation of their small native village: Belmonte Calabro, we started renovating a small house and saw the results we have chosen to continue … 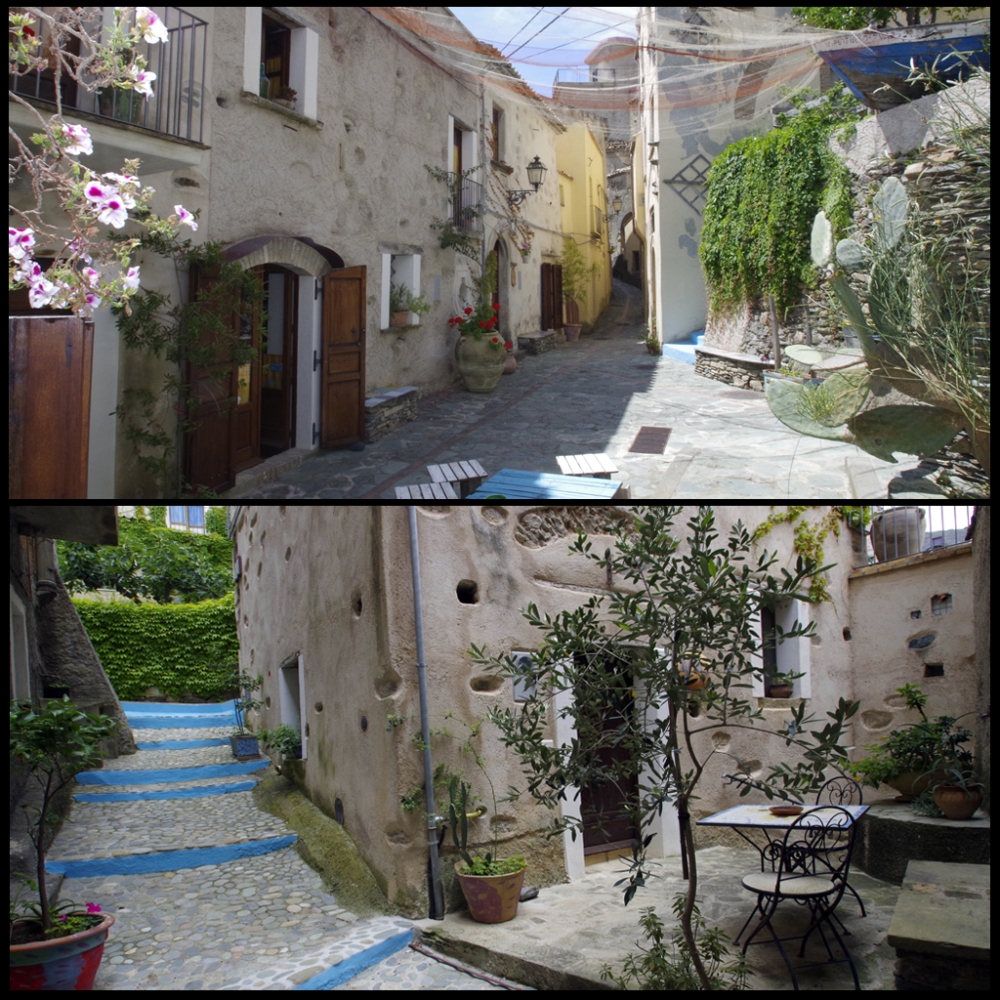 The diffused hotel -ECOBELMONTE- of Belmonte Calabro: the village, of solid medieval structure, still preserves the signs of the many civilizations that have tarnished it: Greeks, Arabs, Bruzi, Spaniards, French …, in the province of Cosenza, today from 14 fully furnished and autonomous houses (39 beds) restored by entrusting the renovations of the houses uninhabited for decades and decades by expert local artisans, who have used typical materials, maintaining the original characteristics of the interiors of the Calabrian houses and at the same time following the indications of the most current bio-architecture and bio-building.

Belmonte Calabro is located in the center, on the Tyrrhenian Sea, of the mythical Calabria region just a few kilometers from the international airport of Lamezia Terme and a convenient starting point to visit the entire region to discover the natural treasures of the Sila, Pollino and the national parks. Aspromonte; to discover the mysteries of the important and numerous archaeological sites in the area. 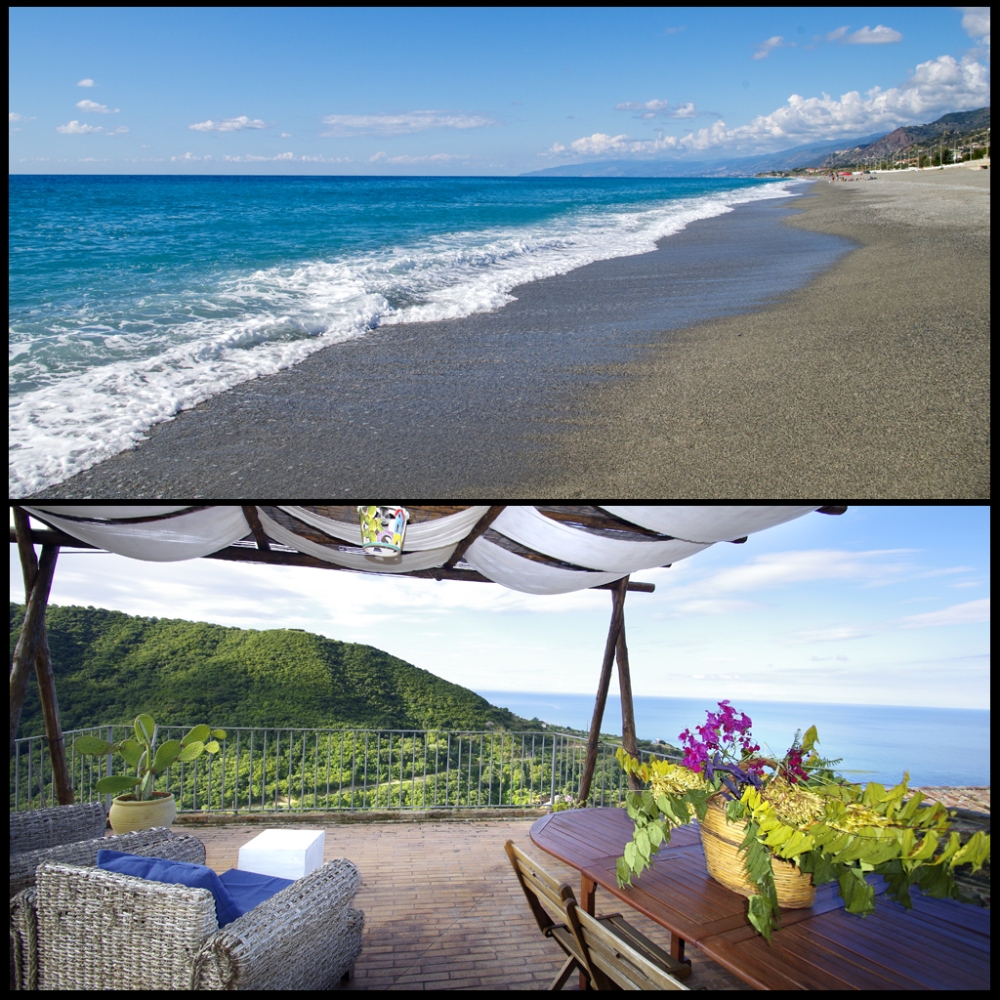 Continuing our journey to the extreme south of Italy, we can help but stop to admire the most beautiful view of Calabria: Monte Sant’elia. From this mountain overlooking the sea the view that opens from the view takes your breath away for the boundless beauty of the landscape.

A place where land, sea, sky, Calabria and Sicily meet! There is no place, elsewhere, from where it is possible to embrace such a vast horizon at a glance, and enormous optical delight so varied to the point of feeling a strong sensation of amazement and bewilderment. To the west, Etna, Messina and the Strait; the lakes of Ganzirri, the Sicilian coast up to Punta Milazzo and the Aeolian islands; Scilla and Bagnara on the Costa Viola, with a peak of the Marinella di Palmi harbor; to the north, the Tonnara beach to Poro and Capo Vaticano.

The legend of Sant’Elia and the Devil

In fact, on the Mount Sant’Elia, under which Palmi was founded, St Elia was meditating when he saw a very strong man coming towards him, carrying a heavy sack on his shoulders. Intrigued by that unusual presence, St Elia asked the traveler: “What’s in the bag? Where are you going so fast? ” “Port of the silver coins” – replied the man – “and I am ready to give you half, if you accept them. You would become rich and lucky! ” “But where did you find them?” Asked St Elia. “In an abandoned cottage, left there by who knows who. If you do not want them, it does not matter, I’ll keep them all. ” But St. Elias did not have to repeat it twice, took a handful of coins and began throwing them one by one down from the mountain. When they touched the ground they turned into large black stones and, after having rolled for some time, stopped on the grass, on the ground or on the rock. The man, turned black and with fiery eyes, turned out to be the devil. Behind him suddenly two huge bat wings opened and flew away, reached the waves of the sea in which it sank. The waters of the sea then produced a foam from which emerged a cone-shaped island that, like a chimney, sent to the sky huge flames of smoke and fire. So was born the Stromboli who had imprisoned the devil and, with him, all the evil spirits of this world. Stromboli means “spinning top” as the devil, to send a lot of smoke from the chimney of the volcano, must continually turn on himself, very angry that he left the “palm country” where he had clung to a rock to avoid falling in the sea. On the top of Mount Sant’Elia, in fact there is a boulder that bears fingerprints and diabolic nails to which, out of fear, no one dares to approach.

After having been breathless for the incredible Calabrian landscape and its legends we finally arrive near the tip of the Italian Peninsula where we can admire one of the most beautiful countries of Calabria: Scilla.

Beautiful and mysterious, Scilla is the ideal place to spend your holidays. It is a town with ancient origins, able to enchant for its natural beauty and also for its noble past full of pathos. Known in antiquity to be the isthmus of Scylla and Cariddi, it is today a center of great historical and economic interest.

The most important monument of Scilla is undoubtedly the Castle of Ruffo of Norman origin, which is located on the rock overlooking Scilla; unfortunately nothing remains of the ancient walls that reached the sea.

The old town is characterized by numerous palaces and churches of great beauty such as the Church of Maria Santissima Immacolata and the Church of San Rocco, patron saint of the city, where the celebrations for the saint are held.

Since the earliest times, the Strait of Messina has always been a place full of charm and charm that has contributed significantly to create the many myths associated with it.

The navigation of the Strait, in fact, had in antiquity a very bad reputation and actually presents considerable difficulties, especially for the rapid and irregular currents. Even the winds blow violently and sometimes in conflict with each other. At times, the currents reach a speed of 9 km per hour and colliding give rise to huge vortices that surely terrorized the sailors. The best known are what the ancients called Cariddi (she who sucks), which is formed in front of the beach of Faro and the other Scylla (the one who tears), which is formed on the Calabrian coast from Alta Fiumara to Punto Pizzo.

These two famous vortices derive from the impact of the waters against Punta Peloro and Punta Torre Cavallo.

The Little Venice of the South is the oldest and most fascinating district of Scilla, a seaside destination in the province of Reggio Calabria, famous for fishing for the Swordfish and for the wonders of its historic center.

An old fishing village in Calabria, remained intact and not affected by mass tourism. This is Chianalea, a small town on the Tyrrhenian coast crossed by charming narrow streets and fishermen who, under the house, build fishing nets, make small repairs to the boats or prepare to leave to face a new day at sea.

The waves of the sea caress the village and often penetrate almost inside the houses that are continually subjected to the force of impact of the water, this is why it is called “Little Venice”.

The atmosphere becomes even more magical in the evening, when the sound of the waves is the natural background that cradles the sleep of the inhabitants. Because of this peculiarity, Chianalea di Scilla appears among the most beautiful villages in Italy and deserves to be discovered.

The village is an enchanted place where the houses can be compared to boats in continuous contact with the sea. Its name, Chianalea, derives from “Piano della Galea”, but it is otherwise called also Acquagrande or Canalea, as the alleys that descend to the sea seem like small canals. 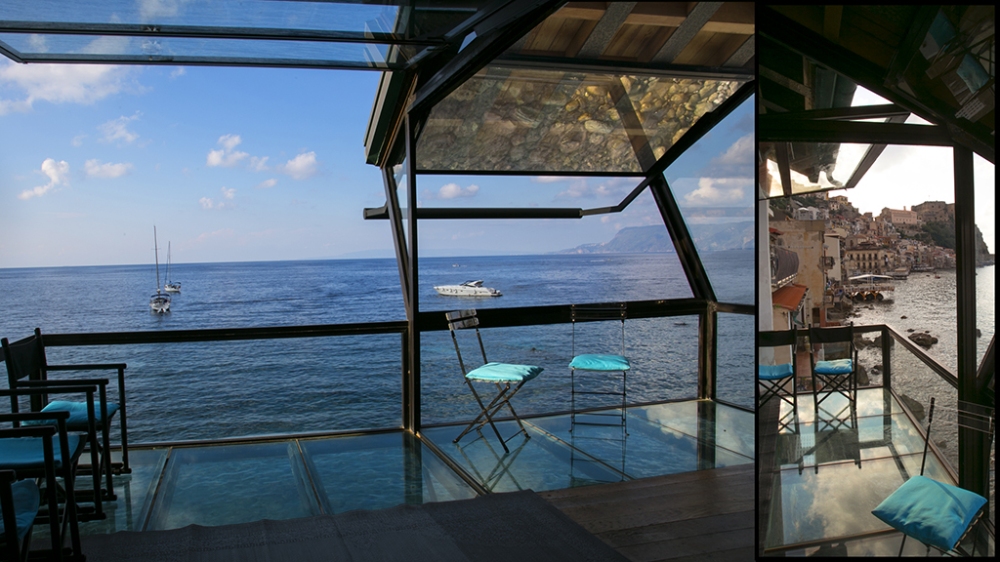 On the “Scaraggio Taggio” there are anchored fishermen’s boats framed by the imposing Palazzo Scategna, with its double order of squared-stone balconies arranged on three floors. Nearby is Villa Zagari, a 1933 building in eclectic style. 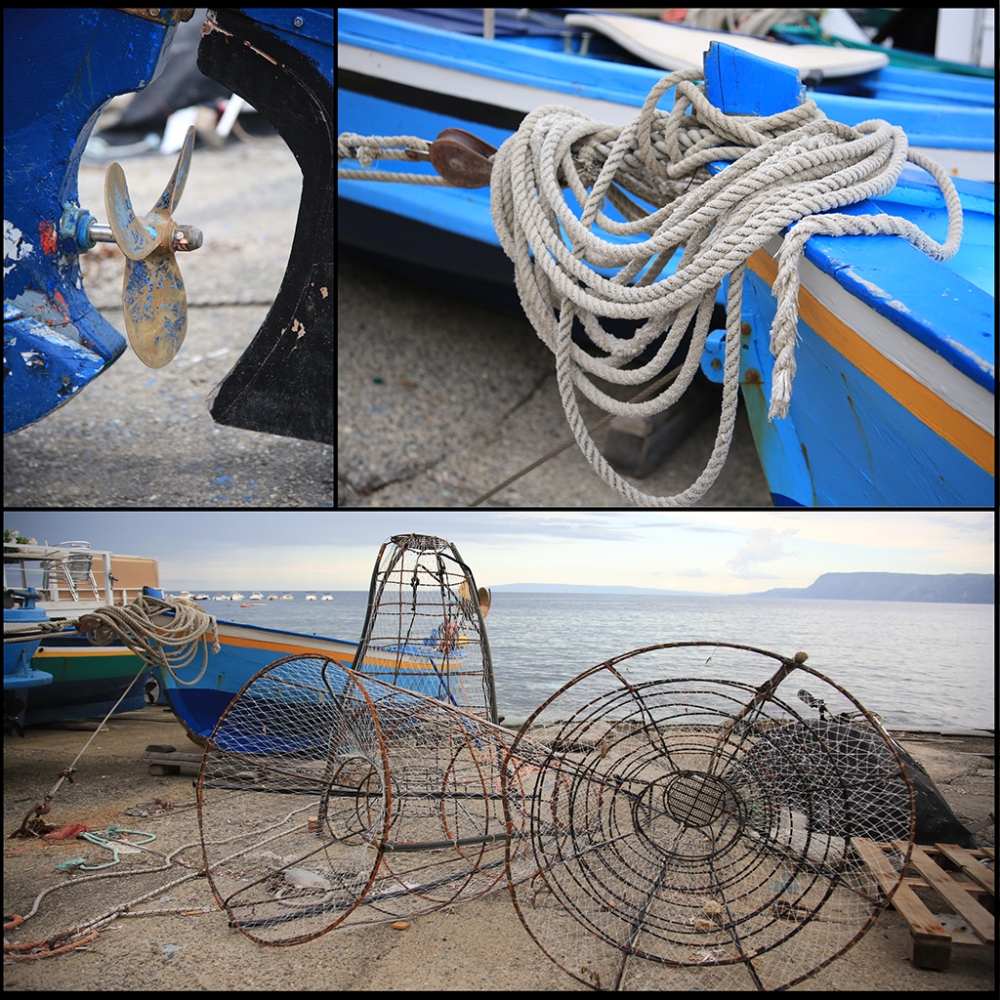 Here and there in the village of Chianalea are scattered ancient fountains, squares and churches, all very beautiful and well-kept. On the coast the waves crash on the rocks creating a breathtaking landscape. The Ruffo Castle dominates all over the village, a fortress re-adapted for residential use by Count Paolo Ruffo who in 1532 took over the fief of Scilla from previous lords.

Chianalea is crossed only on foot, passing through the narrow streets almost all flat and walking you immediately notice how the houses built on the sea each have a family boat.

In telling this wonderful region you can not ‘not have a taste of the famous Calabrian cuisine, simple, but certainly very tasty, especially thanks to the use of spices and chili.

The latter is used, together with the oil as a preservative for the dishes. A specialty of the splendid Scilla is definitely the swordfish, used both to prepare first and second courses.

In summer it is also prepared swordfish salad dressed with lemon and orange, a real delicacy. 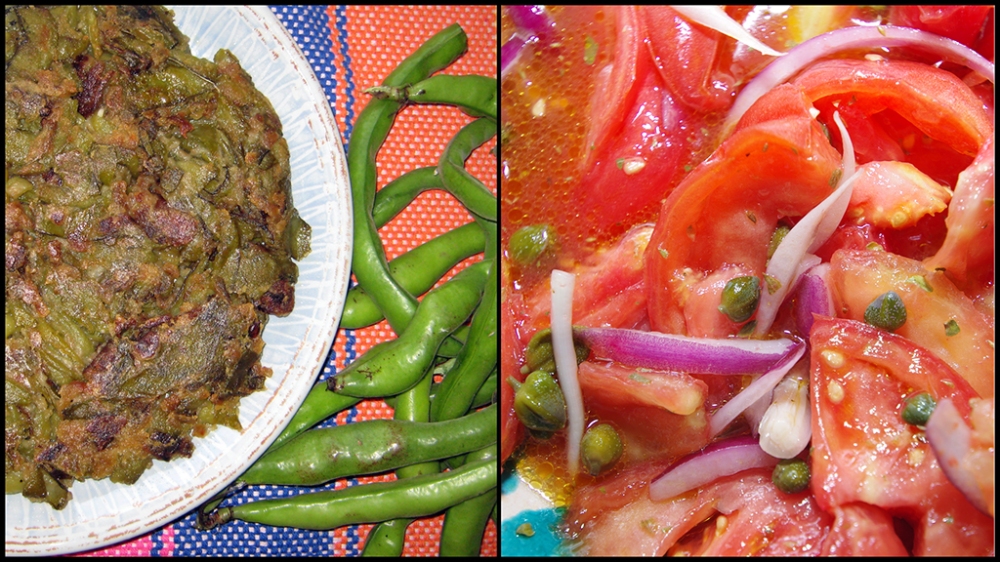